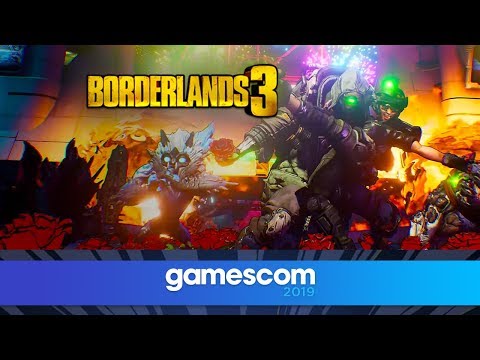 This video may contain spoilers for the Borderlands end-game

Two new elements for the end-game content in Borderlands 3 are revealed. These are the return of the ‘Circle of Slaughter‘ Domes and a whole new mode called ‘Proving Grounds‘. Borderlands 3’s Creative Director, Paul Sage,  announced these during the pre-show of Gamescom 2019. In an interview with Geoff Keighley,   Paul gave some explanation of these 2 pieces of content.

The Circle of Slaughter is something that’s been with the franchise since the first game. In these arenas, you had to fight off waves of enemies.  You might recognize this game mode as the ‘Horde Mode’ in some other game franchises. Throughout the Borderlands franchise, there have been various domes. Each of these Circle of Slaughter domes had their own theme and therefore their own set of enemy types. Your task is to kill all the enemies the game throws at you. After each wave, the difficulty gets increased and you will be facing more and more challenging enemies.

Mister Torgue will return in Borderlands 3 because Torgue is sponsoring the Slaughter Domes across the various planets. Throughout the event, Mister Torgue will also give you additional bonus objectives. So expect some colorful commentary and weird challenges during your runs.  The more waves you complete the better your rewards will be.

Later on in the game, you can get access to the Proving Grounds. If you are familiar with Borderlands 2’s digi-struct peak then you are somewhat familiar with the task at hand. In the proving grounds, your skill will be tested.  There are 6 different proving grounds, throughout the game. Each of these challenges is comprised of various stages. Basically each map contains 3 sections in which you fight waves of enemies and in the final section you end with a boss fight. You will need to clear out these locations and defeat the boss within 30 minutes to complete these challenges.  Throughout the proving grounds, you encounter additional challenges. When you manage to complete these, the quality of your reward will increase.

I got to capture a play session of the  Proving Grounds at Gamescom. So check back soon…

If you don’t want any spoilers then you should skip this section.

In the video Paul mentions you will be encountering an Eridian called the Overseer. This alien will host the Proving Grounds challenges. Paul also mentions that throughout the game you will be able to find hidden acient texts. If you looked closely to the exclusive Eden-6 Gameplay you might already have seen one. I also discovered one during my Zane playthrough during the inZanely fun Balex mission. In my play sessions I wasn’t able to decode the text yet. So some event has to happen throughout the game in order to decode those. I think that once you found all of these hidden clues on a planet you will be to access one of the Proving Grounds. It wouldn’t surprise me if there are 5 planets and therefore you unlock 5 Proving Grounds. Completing all 5 of these challenges will unlock the final 6th Proving Ground.