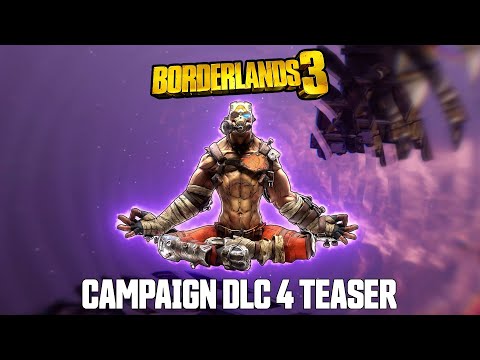 Randy Pitchford, President of Gearbox Software, is teasing the upcoming Borderlands 3 DLC. Earlier he tweeted the sentence “Roll for initiative!“. This is a quote from Tiny Tina in the 4th DLC for Borderlands 2. This is a ‘Dungeons and Dragons’ inspired DLC where the Vault Hunters play a game of Bunkers and Badasses. Later on Randy made another tweet saying he rolled a 2, a 14, and another 2. If you match these numbers up next to the alphabet you get B N B (2 = B 14 = N 2 = B). There is your second hint at Bunkers aNd Badasses.

Tiny Tina’s Assault on Dragon Keep is one of the best DLCs that Gearbox ever produced. When they mentioned that they would use that quality bar for the Borderlands 3, I thought GBX was trying to sweeten the Season Pass deal. That said, they have delivered 3 high-quality DLCs already. With another ‘Bunkers and Badasses’ Story Campaign add-on on the horizon, I’m HYPED!!!

In Tiny Tina’s Assault on Dragon Keep, she and the Vault Hunters play a game of D&D and throughout the story, a lot of crazy stuff happens. However, there is a greater moment in the game as she learns how to deal with the loss of a loved one. I think this theme will return but then with Krieg and Maya. We already have gotten hints at this being “THE KRIEG DLC“. Well, when you talk about Krieg you have to mention his connection with Maya. There will be an internal struggle not just with the loss of Maya but also with himself. Because you know Krieg has 2 voices, a calm gentleman and the psycho.

Good Time to be a Borderlands fan

Mitsu mentioned that the next episode of the BorderCAST will also feature The Borderlands Show Crew and an exclusive interview. The Borderlands Show is all about the big reveals. Special interviews during the BorderCAST usually only happen when there is a content drop. So there is definitely something going on there. I asked “The 2K Influencer Guy” if it’s a good time to be a Borderlands fan. This is kinda a callback to the Pre-Borderlands 3 Announcement Hype where a 2K Spokesperson said the same thing.

Bro, it’s the best time! Wait ‘till you see what we have coming. 😉

I would love to see the swordsplosion return. It’s a shotgun that shoots swords that explode on impact. It was a great weapon in BL2. Another awesome thing that Assault on Dragon Keep brought was magic spells. These spells replaced your grenades and would refill themselves. So basically, you had grenade regeneration and could throw chain lightning spells all day.

I hope the writers are also going to break the 4th wall again. Have things happen inside the game and have the Vault Hunters who are playing the game react to the events.