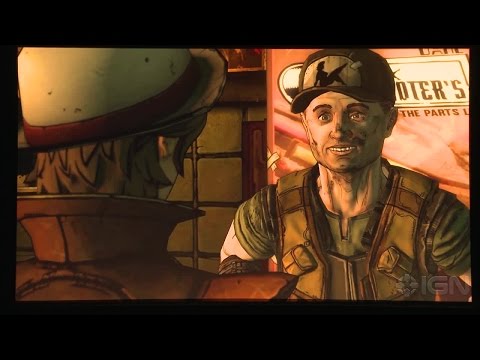 Tales From The Borderlands Episode 2 Teaser at PAX South 2015

There was a segment dedicated to Tales from the Borderlands during the Gearbox panel at PAX South. Although Telltale couldn’t announce a launch date for episode 2 of the series, they could show some screenshots and a trailer.

With this footage, they showed off 2 new characters but also 2 familiar characters of the borderlands series.

These two characters are out to get you and they don’t seem to be the friendly type.

Athena makes her return in Tales From The Borderlands. After being an NPC in the General Knoxx DLC for the original Borderlands and a playable Vault Hunter in the Pre-Sequel. She once again is part of the story.

The other well-known character in Tales From The Borderlands is non-other than, Scooter.

Gearbox Software’s Chief Creative Champion, Mikey Neumann, does the voice of Scooter and he confest that he had a hard time adjusting his voice to the dialogue. Because Scooter has an enthusiastic voice that screams most of the time. Therefore, it was challenging to bring the voice back down for some serious dialogue.