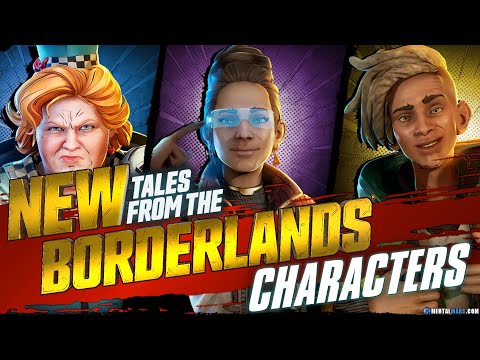 New Tales From The Borderlands has 3 main characters you will play as. Your choices will impact their adventure as they face down a planetary invasion, vicious vault monster, and cold-hearted capitalist. But who are these underdogs and who are the other characters they will encounter during their quest?

Dr. Anuradha Dhar is an enthusiastic but-tense genius who abhors violence and killing. Despite being prone to panic attacks when things get hectic, Anu always trusts in the power of science to somehow make it all better. Did we mention she works for Atlas? Well, you know what they say: “If you can’t beat ’em, join the company and try to make positive change internally!”

Octavio Wallace-Dhar leaves the booksmarts to his older sister, Anu. Everything he needs to know was picked up on the Promethean streets. Always one to leave a lasting impression, Octavio is his own hype man, complete with a state-of-the-art ECHOdex full of black-market apps and hack-ready functionality. Octavio may not always make the best decisions—or even kinda-passable ones—but his heart is usually in the right place.

Voice by Diego A. Stredel

Fran Miscowicz is mad. You’d be mad too if some Maliwan jackhole shot a laser through your small business. So yeah, Fran’s got a bone to pick and some anger issues to sort out… but that doesn’t mean she isn’t without sweetness, charm, or a real lust for life. Fran contains multitudes—as does her trusty hoverchair, which is chock full of useful gadgets for both work and survival situations. On Promethea, the two often go hand-in-hand!

An eloquent assassination bot with instant access to a database of known targets, L0U13 is not without manners (for instance, he’d never kill you before learning your name). Programmed for a life of calculated murder, L0U13 aspires to more. This dapper killing machine longs to give humanity the gift of laughter and is pursuing a side career in comedy. Fascinated by the group dynamics between Anu, Octavio, and Fran, L0U13 is happy to track the strength of their ever-evolving bonds via a rather unconventional rating system.

Susan Coldwell didn’t become the CEO of the Tediore weapons corp by being nice or playing fair. If you’re going to break the glass ceiling, you might as well cut a few throats with the pieces. That’s just smart, economic, Tediore-brand thinking. Now that she’s at the top, she’s investing in a business plan that will shake-up the weapons industry. Why sell weapons to the common man when you can weaponize the common man?

As a Research Assistant at Atlas, Phuong’s primary responsibility is to keep Anu grounded and focused. Other responsibilities include talking to test subjects, cataloguing rare ores, and keeping tabs on the hot company gossip. After a long day helping Anu invent world-changing technology, Phuong loves to kick back with pals and play Vaultlanders.

TIMM-E is imbued with a sense of divine purpose: to assist Rhys Strongfork, CEO of Atlas, with any and all of his needs. Whether that means managing his calendar or turning into a chair to cushion Mr. Strongfork’s behind, no request is too big or too small.

Rhys Strongfork is the current CEO of the Atlas corporation but before he rose to the top he was just a middle manager at Hyperion. Rhys is one of the two playable characters in the Original Tales from the Borderlands and also a major character in Borderlands 3.