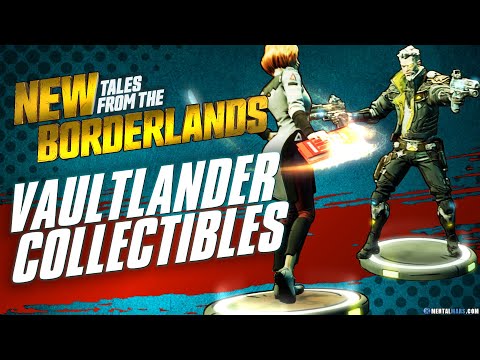 Vaultlanders are collectibles that you can find in New Tales From The Borderlands. They are hidden throughout the various environments in the game.

These collectibles are the basis for the epic Vaultlander minigame where you battle to the DEATH, figur-atively speaking of course because they are small plastic figures.

As you play through the story, there are surprise encounters where you’ll need to engage in plastic figurine warfare, attacking and dodging the enemy figurine via Quick Time Events.

These encounters are like your Pokemon battles and just like that franchise, the winner takes the loser’s Vaultlander for their collection!

Well, losing your Vaultlander is actually, the in-universe rule for hardcore Vaultlander players. Gearbox Software actually, designed the game in a way that you can’t lose your collectible, however, you need to restart the battle.

Vaultlander Battles occur in every episode in New Tales From The Borderlands. They are there to break away and change the pace of the game.

James Lopez (GBX Producer) mentioned in an interview that you can just bump into a rando after a big character moment and engage with a Vaultlander Battle.

As you play, you can acquire more and more Vaultlanders. You can even get a special FL4K Vaultlander when you Pre-Order New Tales From The Borderlands.

How do Vaultlander Battles Work?

Vaultlander Battles is basically a button basher with some counter moves. You can press the action button to attack your opponent.

Occasionally, the other player will fight back. You now have to dodge these attacks by performing a quick time event. You need to move your figurine in the direction that is shown on the screen (left, right, up, or down).

When you successfully dodged your opponent’s attacks they will be stunned for a brief moment. During this time window, you can deal critical hits which basically deal double damage.

Once your opponent’s life bar is drained you can perform your finisher. Each Vaultlander has a unique move to obliterate the opponent from the table. In order to do this you will need to successfully execute a series of actions. If done right, your vaultlander will perform their signature move, if not you are still victorious in combat.

During a special NextMakers Town Hall, Gearbox Senior Producer, James Lopez told that Vaultlanders initially only were going to be collectibles during the free movement sections of the game. However, when joking about these figures could be used in an in-universe fight game, things got out of control and Vaultlander battles were implemented into the game.

During the Character Introduction Trailer, you can see Octavio scroll through articles on his smartwatch. One of the articles has an image of Marcus Kincaid with the headline saying: “Vaultlanders Creator Wins Big” suggesting Marcus is the creator of Vaultlanders.

Do you want to know where to find every Vaultlander in New Tales From The Borderlands? Well, you are in luck because I have a full guide down below. I have seen other guides mention you need to get at least 50% in a relationship metric, however, if that was the case I would have received them all at once. That wasn’t the case.

How to Forge the Flaming Sword of Destiny in New Tales From The Borderlands?
November 13, 2022

Can you Save Staple Face in New Tales From The Borderlands?
November 12, 2022

How to Claim the Insurance Money in New Tales From the Borderlands
November 11, 2022

How to Rescue Juniper From The Vault Monster in NTFTB
November 10, 2022

Vaultlander Locations in New Tales From The Borderlands
November 9, 2022

Best Guide To Earn Money in New Tales From The Borderlands
October 30, 2022