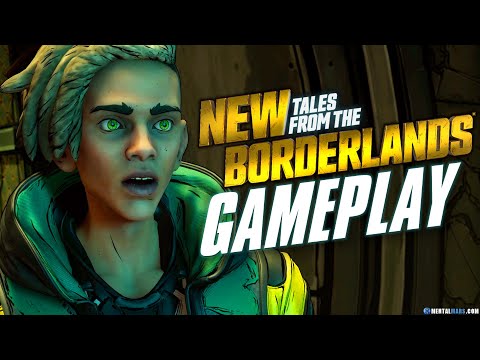 Gearbox Software showed off the first gameplay footage of New Tales From The Borderlands at PAX West 2022. As a member of 2K Games’ Nextmaker program, I received a presentation about the game and we also got to interview developers from Gearbox Software.

I was pleasantly surprised by the gameplay demonstration we received. Because I was a bit hesitant about the new characters that were shown in the reveal trailer. I had a very different initial impression of Fran and I didn’t really like a quirk that Octavius did during that trailer.

Therefore, I wondered if I would like or relate to these characters. However, the Gameplay demonstration gave me a whole new perspective on these characters and I enjoyed the dialogue between them.

The writing and voice acting are great. They felt believable/relatable and you could feel there was some history between them.

The character animations looked great. I like how they added the line art in the facial expressions. You can see the skin wrapping like in real life but when the wrinkles get too deep an artistic “Borderlands” line is added.

We clearly saw the core Tales From The Borderlands gameplay with dialogue choices that let you create your own story.

During our demonstration, the Gearbox Devs also showed off what happened if you failed a quick time event. I can tell you, Fran got brutally killed and I was shocked! The Gearbox devs were savage with that one.

When you fail, you get brought back to the moment leading up to that event allowing you to make different choices or try that quick time even one more time.

The developers also assured us that you don’t have to have cat-like reflexes to play this game. There is a difficulty slider for these quick-time events. So you can give yourself more time or even set it to “Any Button” so that you can have an enjoyable experience.

Also, not every quick-time event has hard failures. So you won’t die with every encounter it could mean that the events of the story will change.

The event leading up to the Vaultlander battle was great. Other creators that were present during the presentation enjoyed the references. Badass Superfan is such a nerd!

I was amazed that they really made the section of the Vaultlander battle feel like a fighting game. The whole layout of the menu and giving each figurine its own stats.

The Gearbox Devs told us that there are moments you play as all three characters at once but there are also sections where you will focus on one or two characters.

New Tales From The Borderlands looks great and I have the impression that it will be an enjoyable experience. While initial community feedback was asking for the return of the old cast, I think these new characters are able to deliver a quality experience.

I’m looking forward to this game!