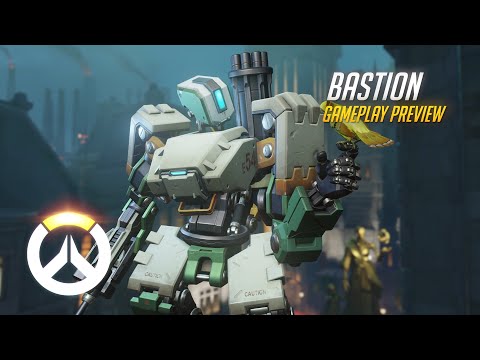 Watch 1080p HD game footage of a early version of Overwatch with unedited gameplay. Set your sights on Widowmaker in this  match.  The game takes place on King’s Row, a Point Capture/Payload hybrid map situated in the heart of England. Widowmaker is on the offense and shows of his skills in action.

Once a frontline combatant in the devastating Omnic Crisis, the curious battle automaton known as “Bastion” now explores the world, fascinated by nature but wary of a fearful humanity. Though Bastion appears to be gentle—even harmless, at times—its core combat programming takes over when the unit senses danger, utilizing its entire arsenal to eliminate anything it perceives as a threat.

Repair protocols, remote-controlled mines, and the ability to transform from an automatic rifle-wielding, mobile assault mode into a stationary siege cannon all provide Bastion with a high degree of effectiveness on the battlefield.