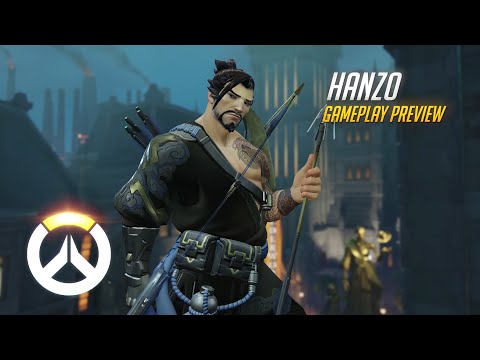 Watch 1080p HD game footage of a early version of Overwatch with unedited gameplay featuring a full match with the Master bowman Hanzo takes aim against his foes.  The game takes place on King’s Row, a Point Capture/Payload hybrid map situated in the heart of England. Hanzo  is on the attack  and shows of his skills in action.

Hanzo Shimada abandoned the criminal empire to which he was heir, forsaking familial duty to seek redemption for killing his brother. Hanzo now travels the world, perfecting his skills as a warrior, attempting to restore his honor and put the ghosts of his past to rest.

An expert marksman, Hanzo can reveal nearby enemies with sonar arrows or fire scatter arrows to strike multiple targets. He can also scale walls with his bare hands and summon a devastating spirit dragon to consume his enemies.