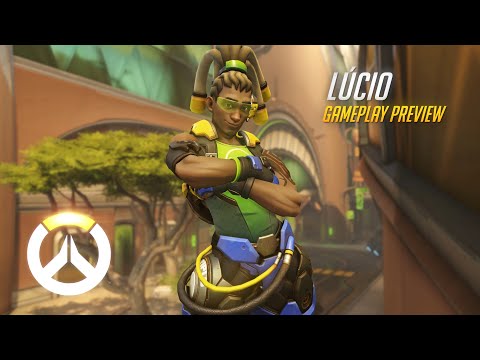 Watch 1080p HD game footage of a early version of Overwatch with unedited gameplay. Armed with his signature Sonic Amplifier, Lúcio never misses a beat in this  match.  The game takes place on Numbani, a hybrid Point Capture/Payload map set in a utopian city on the edge of the African savanna. Lúcio is on the defense and shows of his skills in action.

Growing up in one of Rio de Janeiro’s favelas, Lúcio initially turned to music as a way to lift people’s spirits and help them rebuild as a community in the wake of the Omnic Crisis. Now an international celebrity, Lúcio seeks to inspire positive social change through his music and fights to make the world a better place.

On the battlefield, Lúcio’s cutting-edge Sonic Amplifier buffets enemies with projectiles and knocks foes back with blasts of sound. He also plays two different songs—one to heal his team and the other to boost their movement speed—and uses his Crossfade technique to switch between them at will. And when the going gets especially rough, Lúcio will drop the beat, activating a temporary Sound Barrier to shield all nearby allies.