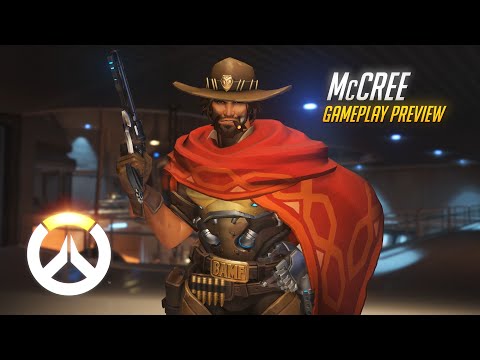 Watch 1080p HD game footage of a early version of Overwatch with unedited gameplay featuring a full match with the outlaw McCree dispense justice on his own terms.  The game takes place on Watchpoint: Gibraltar, a Payload map set in an abandoned Overwatch outpost perched above the Mediterranean Sea. McCree  is on the attack  and shows of his skills.

Once an operative working for Blackwatch, Overwatch’s covert ops division, the outlaw Jesse McCree now lives life as a gunslinger for hire. But while McCree’s talents are sought after by parties great and small, he fights only for causes he believes are just.

Armed with his Peacekeeper revolver, McCree takes out targets with deadeye precision and dives out of danger with eagle-like speed. If dead men could talk, they’d no doubt tell you about the time he wiped out a chamber’s worth of enemies faster than they could say “Draw!”