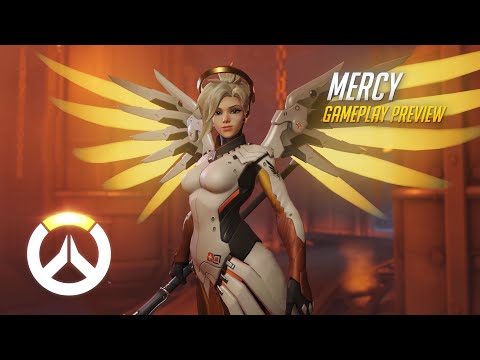 Watch 1080p HD game footage of a early version of Overwatch with unedited gameplay featuring a full match with the healing powers of Mercy.  The game takes place on Temple of Anubis, a Point Capture map located on the enigmatic Giza Plateau. Mercy is on the defense  and shows of her skills.

A guardian angel to those who come under her care, Dr. Angela Ziegler (“Mercy”) is a peerless healer, brilliant scientist, and staunch advocate for peace. Though she spends most of her time caring for the broken and dispossessed in crisis areas around the world, Mercy can be counted on to don her Valkyrie swift-response suit whenever innocents are imperiled.

Mercy is a formidable frontline medic, capable of healing and strengthening her allies, and even resurrecting them when they’ve fallen on the battlefield.