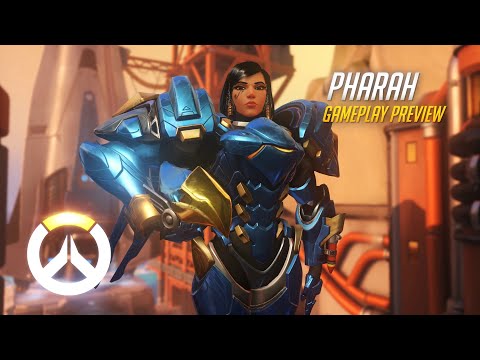 Watch 1080p HD game footage of a early version of Overwatch with unedited gameplay. Pharah secures the skies in this  match.  The game takes place on Watchpoint: Gibraltar, a Payload map set in an abandoned Overwatch outpost perched above the Mediterranean Sea. Pharah is on the defense and shows of his skills in action.

Hailing from a long line of decorated soldiers, Fareeha Amari’s commitment to duty and honor runs in her blood. Under the call sign “Pharah,” Fareeha currently serves as a security chief for the private security firm Helix Security International, though she dreams of fighting the good fight and making a difference on a global scale.

Soaring through the air in her Raptora Mark VI combat suit, and armed with a rocket launcher that fires concussive and high-explosive rockets, Pharah is a force to be reckoned with for any who would threaten those under her guard.