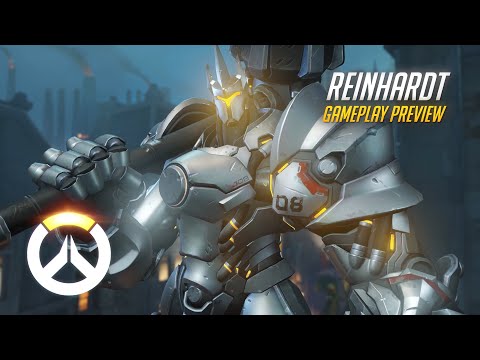 Watch 1080p HD game footage of a early version of Overwatch with unedited gameplay. Reinhardt charges hammer-first into battle in this  match.  The game takes place on King’s Row, Point Capture/Payload hybrid map situated in the heart of England. Reinhardt is on the defense and shows of his skills in action.

One of Overwatch’s first and finest agents, Reinhardt Wilhelm styles himself as a champion of a bygone age. Though Overwatch was eventually disbanded, Reinhardt was not content to sit idly by while the world fell to disorder. Donning his Crusader siege armor, he has vowed to fight for justice like a knight of old, defending the innocent and winning hearts and minds with the promise of better days to come.

With his powerful hammer, Reinhardt leads rocket-propelled charges across the battlefield. He wades into the fray, crushing enemies into walls, bringing combatants to their knees, and defending his allies with a massive energy shield.