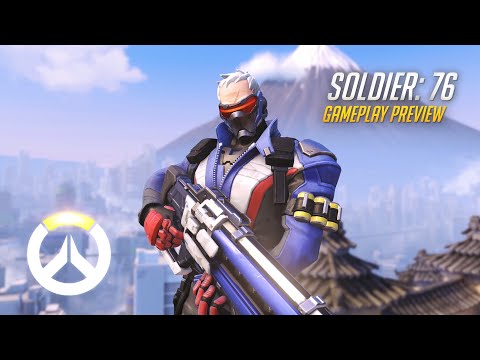 Watch 1080p HD game footage of a early version of Overwatch with unedited gameplay. Old habits die hard for Soldier: 76 in this  match.  The game takes place on Hanamura, a Point Capture map set in an idyllic corner of Japan. Soldier: 76 is on the defense and shows of his skills in action.

Soldier: 76 is on a mission to expose the truth behind the fall of Overwatch. Currently the target of an international manhunt as the prime suspect in a series of attacks around the globe, he’s prepared to do what’s necessary to bring those responsible for organization’s sudden collapse to justice.

Armed with cutting-edge weaponry, including an experimental pulse rifle that’s also capable of firing spirals of high-powered Helix Rockets, Soldier: 76 demonstrates the speed and support know-how of a highly trained military warrior. And when he has an objective in his sights, his target-tracking Tactical Visor ensures he makes the shot every time.