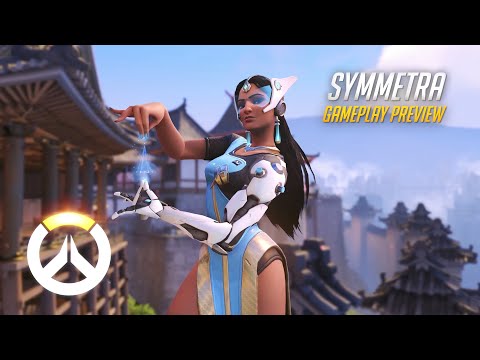 Watch 1080p HD game footage of a early version of Overwatch with unedited gameplay. Symmetra bends the battlefield to her will in this  match.  The game takes place on Hanamura, a Point Capture map set in an idyllic corner of Japan. Tracer  is on the defense  and shows of her skills in action.

Satya Vaswani literally bends reality. By manipulating hard-light constructs, she crafts the world as she wishes it to be, in hopes of engineering a more perfect, orderly society. Given the name “Symmetra” by her employer, the Vishkar Corporation, she believes her actions serve the greater good, but there are times when she wonders whether the control and order she desires are truly best for humanity.

Symmetra utilizes her light-bending photon projector to burn down adversaries and protect her associates. She also puts her technological prowess to work by building sentry drones and setting up teleporters that help her allies rapidly bring the fight to the front lines.