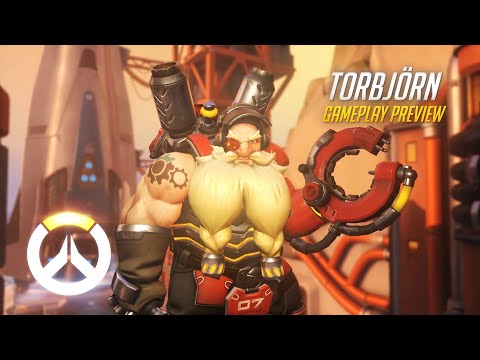 Watch 1080p HD game footage of a early version of Overwatch with unedited gameplay. Torbjörn proves to be a true engineer of destruction in this  match.  The game takes place on Watchpoint: Gibraltar, a Payload map set in an abandoned Overwatch outpost perched above the Mediterranean Sea. Torbjörn is on the defense and shows of his skills in action.

At its height, Overwatch possessed one of the most advanced armaments on the planet, which could be traced to the workshop of an ingenious engineer named Torbjörn Lindholm. In the aftermath of Overwatch’s fall, many of Torbjörn’s weapons were stolen or stashed away around the world. Feeling responsible for his creations, Torbjörn is determined to stop them from falling into the wrong hands and wreaking havoc on the innocent.

Torbjörn’s arsenal includes a rivet gun and forge hammer that he uses to build upgradable turrets and create armor packs for himself and his allies.