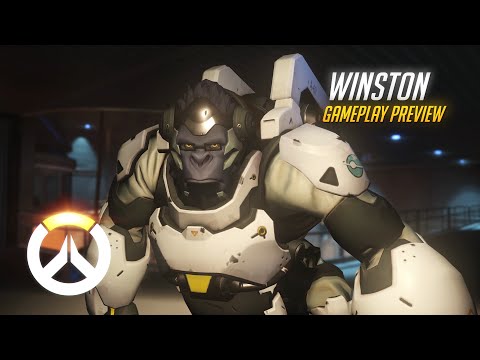 Watch 1080p HD game footage of a early version of Overwatch with unedited gameplay. Witness Winston’s primal rage in this  match.  The game takes place on Watchpoint: Gibraltar, a Payload map set in an abandoned Overwatch outpost perched above the Mediterranean Sea. Winston is on the defense and shows of his skills in action.

A super-intelligent, genetically engineered gorilla, Winston is a brilliant scientist and champion for humanity’s potential. After spending several years working as a scientist for Overwatch, Winston has gone into seclusion since its fall, cut off from the world he believes in, longing for the days of heroism to return.

Winston wields impressive inventions on the battlefield—including a short-ranged Tesla cannon, jump pack, and portable shield projector. But his most powerful weapon can only be unleashed by embracing his animal nature.