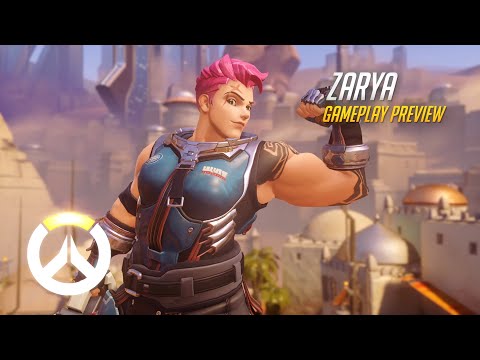 Watch 1080p HD game footage of a early version of Overwatch with unedited gameplay. Follow Zarya as she tanks the frontlines in this  match.  The game takes place on Temple of Anubis, a Point Capture map located on the enigmatic Giza Plateau.  Zarya is on the defense and shows of her skills in action.

Zarya is one of the world’s strongest women, a celebrated athlete who sacrificed personal glory when her home was thrust into war. Now she uses her great strength to protect her family, friends, and country.

Deploying powerful personal barriers that convert incoming damage into energy for her particle cannon, Zarya is an invaluable asset on the front lines of any battle. When the enemy forces rally, a well-placed graviton surge can turn the tide of battle, drawing foes into its field and leaving them vulnerable.