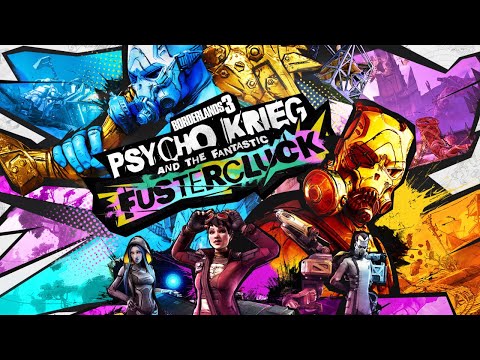 Psycho Krieg and the Fantastic Fustercluck

The 4th Story campaign add-on for Borderlands 3 is called “Psycho Krieg and the Fantastic Fustercluck”. DLC4 will take you into the mind of Krieg the Psycho. Because Tannis believes it contains the secret location of “Vaulthalla”. It’s up to you to help both sides of Krieg’s mind and find this mythical place. On your journey, you will experience the world as Krieg sees it, including his perception of fan-favorite characters like Maya.

Besides a twisted main story, there will also be side-mission and crew challenges where you can score new legendary and cosmetic items.

Psycho Krieg and the Fantastic Fustercluck will be released on September 10 and is included in the Borderlands 3 Season Pass, though a copy of the base game is required to play.

The title of the DLC already hints at it, Psycho Krieg and the Fantastic Fustercluck has a similar premise as Claptrap’s Claptastic Voyage. In that DLC you got to explore the inner workings of Claptrap. Now in Borderlands 3, we get to explore the mind of Krieg. This sets the stage for some really weird stuff and we already seeing a bunch of madness throughout the trailer.

I expected that we would have some encounter with Maya but it seems we will meet up with other fan-favorite characters. In the trailer, you can spot Lilith, Brick, and Mordecai. The fun thing is that we get to see them through the eyes of Krieg, so I’m expecting some unusual or oversaturated behavior from them.

Krieg makes multiple appearances throughout the trailer. There is a giant version of Krieg, I hope he will interact with the world and change it and the story on the fly. I have seen a gold statue of Krieg that comes to life. There is a “normal” version but also you see 2 spirit versions of Krieg, one that represents the peaceful voice, and that represents the chaotic psycho.

Earlier Randy Pitchford hinted at Bunkers and Badasses. While I was hopeful on another DLC like that, this trailer suggests it won’t deliver on that premise. However, next to Tiny Tina’s Assault On Dragon Keep (BL2), Claptrap’s Claptastic Voyage (BLTPS) is one of the best story campaign add-ons Gearbox has delivered.

“Fuster Cluck” is a play on words of clusterfuck, a word referring to a chaotic situation where everything seems to be going wrong, usually multiple things at once. The Fuster Cluck was also a unique grenade in Borderlands 2. It was similar to a MIRV grenade but the additional bombs would always spawn mid-air. This resulted in a sort of artillery strike as the MIRVs would explode on impact. I hope this grenade makes its return in this DLC as a legendary.

Gearbox Software already delivered 3 awesome DLCs for Borderlands 3. Judging from this trailer, it looks like we will be in for another awesome trip.