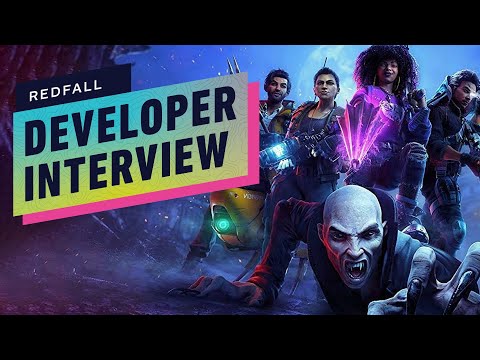 IGN sits down with Game Designer Harvey Smith from Arkane Studios to talk about Redfall during the Summer of Gaming 2022 event. Because it has been a year since Redfall has been announced so let’s paint a clear picture of how the game is shaping up for its 2023 release.

Below you can find a brief extract of the questions and answers. Definitely check the full video interview above for more context and a more elaborate explanation.

How important is Co-Op, can you solo the game?

Yes, you can solo Redfall. You don’t get bots to help you out or anything. It’s your classic Arkane game in that sense. Stealth is a part of Redfall but it’s not a super hardcore stealth game.

You can play Redfall with up to 4 players and then it becomes more of a “Party Game”.

How is progress being saved in a multiplayer setup?

The story progress is only saved for the host of the party because it felt weird and interrupted the flow of the game when skipping the already checked-off missions when a co-op player went back into their own game.

You are able to take your Character progression with you from multiplayer sessions. Things like XP and gear are always saved.

Can you change characters throughout the game?

No, you cannot change your playable character in Redfall once you picked one. Once you picked Dev, Jacob, Layla, or Remi, you are stuck with them throughout the game.

We also don’t have plans to respec your character currently.

How flexible are the character builds?

The weapons in Redfall have levels and rarities.

You can use remnants to augment your character’s abilities. These Vampire artifacts act like magical items.

How open is the open world of Redfall?

It’s a pretty open world, there is some guidance.

The game is divided into 2 districts. The first half of the missions take place in the downtown part of Redfall. District 2 is more of a rural/countryside area offering locations like farms, lighthouses, and churches.

Is the door in the trailer a psychic nest?

Yes, nests are kind of shared psychic spaces where the vampires trip out. These areas don’t follow the conventual rules, that’s why you see a movie theater transition into a forest.

Are nests replayable or required?

You aren’t required to go into the Nests but there is a giant heart in the center of these spaces that contain a powerful psychic remnant that you want to obtain.

Nests are replayable and fairly procedural as various rooms are being stitched together.

Can you tell us more about progression?

Progression is per character. You can have multiple save files for the same character.

Level 40 is mentioned but no mention of this being the level cap.

Teams aren’t forced to play specific roles. You can have multiple people play the same character.

You can change the way your character looks.

When I reached End Game, can I still join my friend who is halfway?

You can definitely join your friends regardless of your player level. When you are under-leveled compared to your friend, you are going to have a hard time but you will earn more XP.

What are the Ward, Blood, and Soul Remnants?

Remnants are objects that the vampires were carrying when the psychic event happened and they ascended. These objects will augment your gameplay in different ways. Remnants can impact your Defense, Health, Skills, or Weapons.

What are grave locks?

There are a limited number of Grave Locks throughout the game that have specific lore to them. This comes from a particular character within the game that has gameplay-modifying abilities.

How do loot drops work?

You can find loot in the world through context clues. Ashes from a vampire could contain a remnant. Bellwether soldiers are more likely to have military gear.

Ammo is regulated in a way that you have enough. You won’t be swimming in it but it’s not like you have to carefully preserve it.

For more info about the game, check out my Redfall FAQ section.