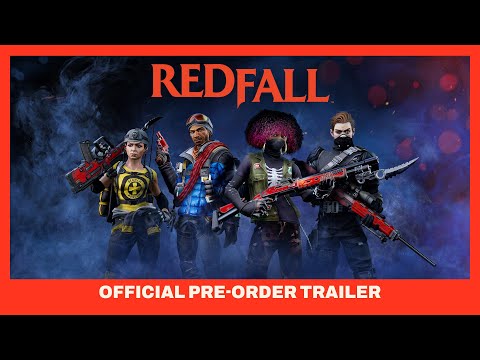 Xbox and Bethesda revealed the release date for Redfall during their developer_direct showcase. You are able to play the game on May 2, 2023, when it releases on Xbox S|X, PC, and GamePass.

There are two editions of Redfall available and there is also a Pre-Order Bonus, which I will break down below.

The Different Versions of Redfall

You get the Vampire Hunter Pack when you Pre-Order Redfall. This bonus is also included when you play the game through Xbox GamePass.

The Vampire Hunter Pack contains the Grim Tide Shotgun. This exclusive shotgun gains a 20% damage increase for eight seconds after killing an enemy. The pack also includes a Polar Vortex multi-weapon skin (weapons shown on the infographic are not included) and a Blood Ravager Stake weapon attachment to help you take back Redfall.

You get access to the Throwback Outfit Pack when you purchase the Bite Back Edition of Redfall. This bonus content provides every hero with a unique outfit and backpack to customize their appearance.

Also included in the Bite Back Edition of Redfall is the Hero Pass. This grants you access to two new heroes that will be released later down the line as post-launch content. These new characters will both have new skills and offer unique gameplay.

Where to Buy Redfall?

If are you interested in purchasing Redfall and want to support the site, please use one of the affiliate links below as it helps me keep creating content for you. I’m excited about this game and therefore this massive resource HUB but it really means a lot to me if we can keep this good thing going <3

Redfall initially was announced to be released in the summer of 2022, however, Bethesda stated on the 12th of May, 2022, that they would delay the game to the first half of 2023. They mentioned that the team at Arkane Austin has an incredible ambition for their game and wants to ensure that they deliver the best and most polished version of the game.

Here at Arkane Austin, we’ve decided to delay the launch of Redfall. The team needs more time to bring the game to life. Thank you so much for your continued support. Redfall is our most ambitious game yet, and we can’t wait to show it off soon.