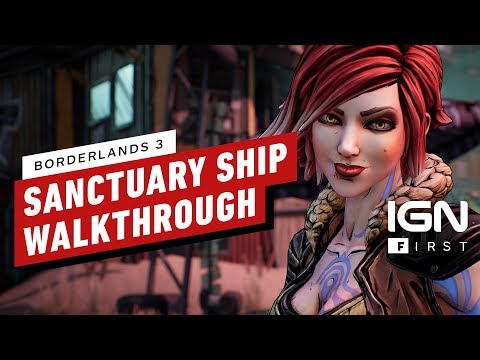 This is your city HUB where you come back to between missions. You can use it to travel to various planets.  The ship will change based on the story progression but also depending on what you accomplished throughout the game.

In this starting area, you can also find your own personal room.  Here you will have access to a safe. This safe functions as the ‘bank’ as well as the ‘stash’. This way you can store items but also use it to swap items between characters. You can also hang up items up on the wall. When you look at the mini-map you will see 3 similar looking rooms. I think these are the rooms for your co-op buddies when you are playing with friends. Now you can check out their stuff.

The Golden Chest is back which you can open up with your Golden Keys.  You can get  Borderlands 3 Golden Keys by using SHiFT Codes or simply playing the game.

In Borderlands 3, Marcus will now sell you storage deck upgrades. In Borderlands 2 and Borderlands the Pre-Sequel you needed to buy these with Eridium at Crazy Earl’s. Now you can simply purchase them with cash money. This way the Developers want to manage the in-game economy better.

Downstairs from Marcus Munitions, you will find the shooting range. Here you can play a mini-game that will let you shoot at cardboard enemies.  These challenges will also have some cool rewards.

In Ellie’s Garage, you can see various red glowing vehicle parts. These are collectible items that you can obtain by completing  Ellie’s crew challenges. You need to hijack enemy vehicles and scan them at a catch-a-ride station.  Then these vehicle parts will also come available for you to digi-struct your own custom vehicle.

Crazy Earl is also aboard Sanctuary III and now he sells various cosmetic items. Next to Crazy Earl’s door is the Veteran Rewards vending machine. Here you can purchase some of the top end-game gear with Eridium. These weapons can have class-specific bonuses.

Moxxi has 4 slot machines and they are better than ever. Each one is themed a little bit. The first one is called “loot-boxer” and that slot machine will be dedicated to guns but you also have one that for shields and grenades. There is also a slot machine where you need to pay with Eridium instead of cash money.

Zero’s crew challenge sends you out to assassinate Badass enemies. When you kill these targets it will create a dynamic event on your friend’s bounty board. Sir Hammerlock has a similar thing as he will send you on a quest to hunt down rare specimens.  The heads of these fine specimens will be hanged up on the wall in Sir Hammerlocks room aboard Sanctuary III.

Tannis is not just the Eridian and Vault specialist, she now is also the medic in the game. So all the medical stuff is now associated with her.