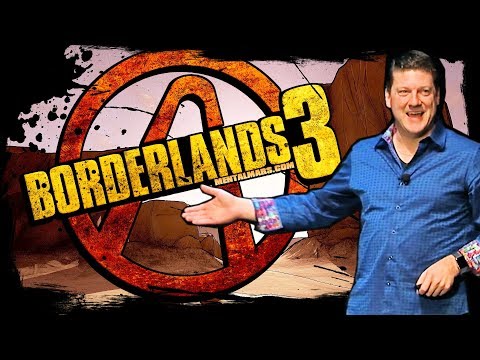 Gearbox Software is showing off a tech demo at the Game Developer Conference (GDC 2017) – utilizing Unreal Engine 4 – which showcases the potential for the upcoming Borderlands 3. Randy Pitchford showcases the new rendering effects and shaders that push the graphics to the next level while keeping the distinct style of the game.

All the Borderlands textures are drawn by hand and this new tech allows for procedurally generated effects but still keeps the style of the artist.

This presentation showcases a desert-like landscape that Borderlands is known for and some production assets. There is also one character in this Borderlands 3 Tech Demo that the community thinks is likely a grown-up Tiny Tina or Janey Springs.

During the presentation, Randy Pitchford mentions that this tech also works in different environments. While he didn’t want to say that the next Borderlands will take place on different planets an easter egg hunt by the Battleborn community suggests otherwise. In the Battleborn DLC Missions, there were some Borderlands 3 easter eggs hidden and these hidden messages got decoded and suggested that we will be going to the planet Promethea.

Want to learn more about the next Borderlands game, then check out the Frequent Asked Questions section. Also want to know what secrets this presentation contains,

If you want to know what secrets this Tech Demo contains, then check out this video by Ki11erSix as he goes over 10 things you might have missed during the presentation.