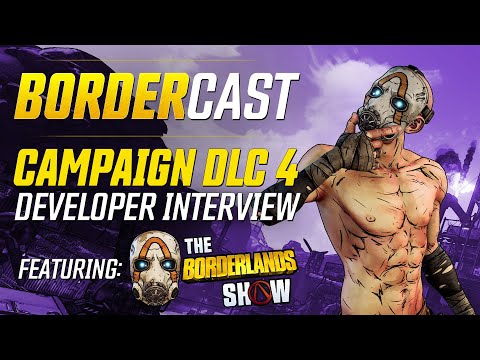 Max Babin joins the BorderCast Show at the 31-minute mark. Max is the Game Director of DLC4 but he has also worked on the main game, DLC1, DLC2, and the Commander Lilith DLC for BL2. With these story campaign addons, he liked to pick a strong character and a strong theme and match these two together. The theme for DLC4, Psycho Krieg and the Fantastic FlusterCluck, is Psychos Mind. Here they can play with your expectations. Set you up on the wrong foot and turn everything upside down. Change missions on the fly to keep you on your toes.

When Max thought about what goes on in the mind of a Psycho he immediately thought about a Psycho riding a giant bullet. You might have spotted them in the reveal trailer but they also showed up in the ‘So happy together’ Trailer for Borderlands 3. These psychos can come from everywhere and will rush you for all angles.

You will play through various memories and one of them involves Hyperion. These enemies first showed up in DLC1 but they are now back in a completely different setting. Since everything plays in the mind of Krieg, some enemy types will now show up in unexpected areas. On top of that, there will also be various cameos from fan-favorite characters.

The memories you playthrough do have a deeper meaning to Krieg. There is a reason why these memories are so vivid. Max wouldn’t go into the various emotions Krieg is going through to not spoil you or mess with your expectations.

Psycho Krieg and the Fantastic FlusterCluck is fully developed from home during the pandemic. The team hopes that this DLC can help you through these rough times. Throughout this story campaign, you get to help Krieg, and learn that it’s ok to ask someone for help. This not just applies to the game but also the real world. You are not alone.

Psycho Krieg and the Fantastic FlusterCluck

Tannis wants to know what makes Psychos Psycho. She has the idea that there is something in their mind called Vaulthalla and if we explore their mind we can potentially unlock that mystical place and understand what makes Psychos the way they are. Fortunately, we have a psycho friend called Krieg and get to explore his mind.

Vaulthalla is locked behind a massive door and the keys to open this door have been scattered throughout Krieg’s memories. It is up to you to collect all the keys and unlock the secrets to the Vaulhalla.