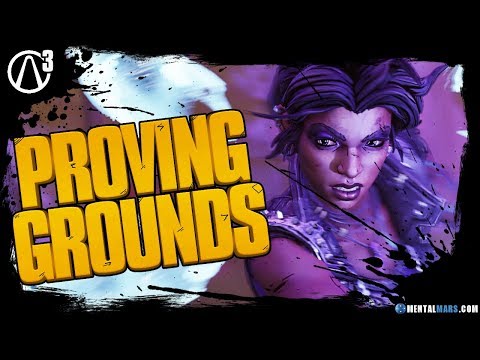 I was able to play ‘Proving Grounds’ at Gamescom 2019. 2K Games invited me to come and play the new Borderlands 3 content at their business booth. There I was able to play a couple of rounds of the ‘Trails of Survival’. This is 1 of the 6 Proving Grounds that are part of the end-game content.  Gearbox announced this content together with the return of the ‘Circle Slaughter’ during the openings night of Gamescom.

What is Proving Grounds?

If you are familiar with Borderlands 2’s digi-struct peak then you are somewhat familiar with the task at hand. In Proving Grounds, your skills will be tested.  These challenges are comprised of various stages. Basically, each map contains 3 sections in which you fight waves of enemies and in the final section, you end with a boss fight. You will need to clear out these locations and defeat the boss within 30 minutes to complete these challenges.  Throughout the proving grounds, you encounter additional challenges. When you manage to complete these, the quality of your reward will increase.

My first playthrough was with FL4K “the Beastmaster” and I found the Proving Grounds to be pretty challenging.  So the content was true to its name. I spect fully into the hunter skill tree and boosted the Rakk Attack with additional charges. While I had my friendly Spiderant with his constant life regeneration I still went down during the fights. Since everyone was being dropped into the end-game content at level30, you needed to pick up the pace and that’s what I did. I enjoyed using my Rakk Attacks and seeing enemies explode in front of my eyes. Having a pet Spiderant was probably not the best choice in an arena filled with enemy Spiderants because I mistook my own pet for an enemy from time to time. Which is stupid because you should know better, yet it still happens. Probably, just me jumping into the game.

My second playthrough was with Zane “the Operative”. I had to play this character because this is probably the Vault Hunter I’m going to play once the game in out. I think I ran a similar build as I did with the Balex mission on Eden-6. The SNTNL Drone is my main action skill so I spect into the Hitman skill tree. I also pick up the Digi-Clone as my second action skill. Having the drone out helps with locating targets because there will be an attack command icon above their head. This icon is to indicate that you can send your drone to this enemy but also comes in handy when your enemies blend in with the background. The Digi-Clone can be very useful and I love that you can teleport places with it. However, in this playthrough I found myself using it to draw agro from enemies. Because you get swarmed by a lot of enemies in the Proving Grounds it helped keep the pressure off of me. My Zane playthrough when smooth and didn’t go into ‘fight for your life’ mode.

Later in the day, I got to capture my third playthrough. However, before things started I asked you which Vault Hunter I should play and (a melee) Amara got requested. This actually got me worried because she is the character I was least excited about. During earlier play sessions at other events, I wasn’t that impressed with her. Also, playing a melee build is not really my style. That said, “no guts no glory” right? So I spect into the Brawl skill tree and picked up the Phaseslam action skill. I could really notice a difference with Amara since the last time I played with her. She got buffed and wrecked those enemies.   If you look at the video above, I think I did a pretty good job on completing the Trail of Survival. The 2K staff was surprised that I managed to complete the challenge this fast.

Proving Grounds is challenging and a great way to quickly jump into the action and get quality loot. If you manage to complete the bonus objectives you can increase the quality of the loot. I noticed weapons with Anointed mutators also dropped mid-battle. So if you are all up for that then this end-game content is for you!