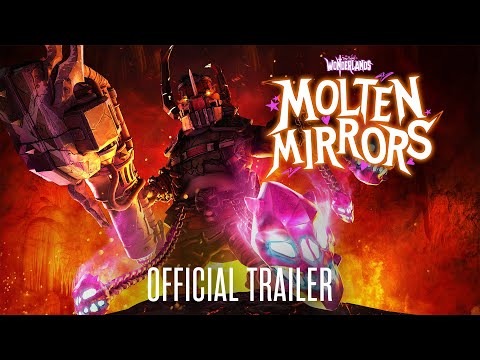 Tiny Tina’s Wonderlands’ third DLC is called Molten Mirrors and will be released on June 23, 2022. You can get Molten Mirrors separately or as part of the Season Pass. This new Mirror of Mystery can be accessed from within Dreamveil Overlook.

You will battle Fyodor the Soul Warden in Molten Mirrors. He rules over his horde of lost souls deep within his mountain stronghold. In order to break their chains, you will need to defeat Fyodor’s murderous mechanized defenses, which include terror-powered turrets, blazing furnaces, and bone-crushing hammers. During your quest, you will also be looting for new weapons, gear, and cosmetic items.

Fyodor will tinker with his weaponized throne for three consecutive weeks to ensure that this time, your mortal soul will be his for the taking. Fyodor’s lair is a veritable tempest of deadly projectiles and malicious machinery and you’ll need fancy footwork and sharp reflexes to get through unscathed.