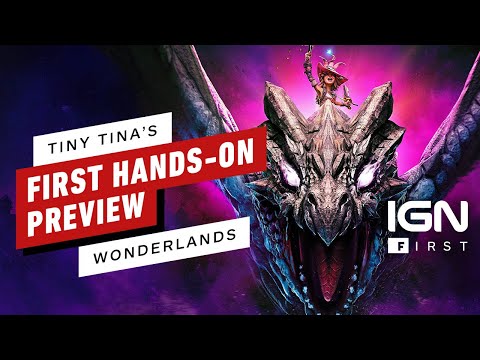 The video contains Mild Spoilers of events in the opening sequence. Settings have been seen in other trailers and there is one joke that shows how weird this game of Bunkers & Badasses can get. The video mainly explains the game's basic mechanics and their impression of them.

IGN was able to get an exclusive hands-on experience with Tiny Tina’s Wonderlands. They were able to play the first area of the game with some overpowered gear. In the Gameplay footage, we see them play the Brr-Zerker, this is one of the 6 playable classes. Every time you see the hero leap and slam their ax into the ground, that’s one of the Brr-Zerker’s Action Skills, just like the Spin-to-Win move. There aren’t any signs of Multi-Classing in this preview.

This first mission looks like a lot of fun. Once the transition kicks in you really have the feeling that the city is alive and under attack. You have NPCs helping you out and you see enemies attacking the castle instead of just waiting for your arrival. There is a war going on.

There was this moment when I thought, why is this random skeleton falling from the sky it wasn’t there a moment ago. Well later on in the playthrough, you see that reinforcements are being catapulted in. Very cool.

The Magic Spells look great. The Meteor emerging from a portal and slamming down into an enemy does look satisfying. It looks like the meteor seeks out a target as it comes in at an angle instead of just dropping down. Just before the meteor comes in you see that enemies and barrels get pulled into the impact zone.

The moment that you see the gameplay fade to black&white, that’s actually the player going into ‘Fight For Your Life’. The cool thing is that they score a second wind with a magic spell. This means that we are able to use magic spells in FFYL, it remains to be seen if it’s locked behind a skill or just a default mechanic.

I saw some ranged weapons that reminded me of some Borderlands 3 weapons. One shooting horizontal beams like the Cutsman and another one had a similar effect as the Atlas Replay. There were some Magic Barrels and I even spotted an Alternate Firing Mode that launched a giant shock orb. You see that the orb starts to chain to enemies once it has been shot again to trigger the effect.

The Shotgun that is shooting the arrows looks very cool. I noticed a magic circle on the ground that lets you pinpoint where you will rain down your arrows. Very Nice! You see that 3 shells are being reloaded every time you take a shot. 8 projectiles will land on the aimed spot which will then trigger the barrage of arrows. I counted at least 36 arrows falling in that area.

The Melee Weapons have different attack speeds. I noticed that the Axe was slower than the sword, this probably will also reflect in the damage numbers.

The Glowing Red Rakk Attack and the Gun firing the Red Glowing Orbs seem to deal Dark Magic. Upon damaging enemies you see small red orbs flying back to you. These can travel through obstacles and will restore your health.

Also, the thing with the drawbridge?! Sounds like we are in for some crazy weird fun!

Tiny Tina’s Wonderlands releases on March 25, 2022, on Xbox, Playstation, PC, and Stadia. Are you wondering which version of the game you should pick up, then check out my complete breakdown of all the TTWL Editions and an Exclusive offer.