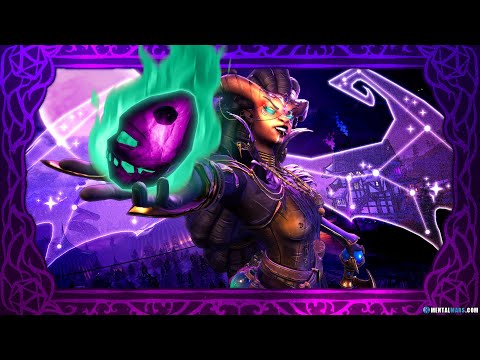 Tiny Tina’s Wonderlands received 4 post-launch content drops called Mirrors of Mystery. Each DLC added a mirror to Dreamveil Overlook. While each of them had its own mini-story, it seemed that they were setting up something bigger.

The Wonderlands Community speculated that Vesper would be the final boss of the fourth DLC, Shattering Spectreglass, however, that wasn’t the case.

That said, there is something interesting that happens when you completed every run of all of the DLCs. Because only then you will find a hidden message in Dreamveil Overlook. A cutscene will play if you interact with Vesper.

In the video above Vesper tells you she was lost and would have given anything to see the world. By paying the price with her eternal soul she was able to see the world she imagined. However, through her mirror, she could only see the worlds she imagined. You were able to free the souls inside and now she sees a bright future ahead as you helped her grow her army.

This is a cryptic message that leaves us players on a cliffhanger, wondering what could be next.

The Next Dragon Lord?

You see these white silhouettes showing up behind Vesper in the cinematic. These silhouettes give her wings and restore a lost horn. The design is presented in a way like it’s written in the stars, as it was meant to be.

This new look of Vesper with the new wings and horns was very reminiscent of the Dragon Lord in my opinion. It gave me the impression that she could fulfill that specific role of the antagonist in the next chapter of Tiny Tina’s Wonderlands.

Randy Pitchford – President of Gearbox Entertainment – has stated that new Wonderlands experiences are being developed. However, he didn’t specify the actual content, therefore, this can mean a multitude of things. Season Pass 2, New Raid Boss, or even Tiny Tina’s Wonderlands 2.

As the cinematic ends, we are left with the image of the new Vesper. She seems power-hungry and on the rise of greatness with her mysterious mirror. What is she up to as her powers grow? I guess we will have to wait and see but be sure to let me know what you think.