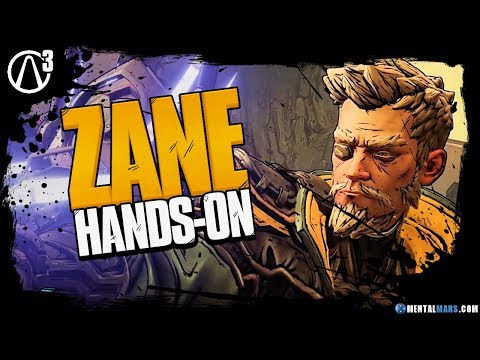 During my play sessions at the Borderlands 3 gameplay reveal event I was able to play with Zane the operative. He is your James bond kinda guy with all of his gadgets as action skills. You can choose from a holographic decoy, a drone, and a shield. The cool thing is that when you play as Zane you have the ability to equip 2 action skills. This makes him a very unique Vault Hunter because we never had such a feature before. The somewhat of a downside is, that you sacrifice your grenades in order to do that. However, don’t worry, due to some clever game design those grenades don’t go to waste but I’ll cover that in the individual action skills.

Who is Zane Flynt

Zane’s first action skill is a Digi-clone. This is a holographic copy of himself. The ability was first teased in the reveal trailer. Back then we started speculating that this decoy would work in a similar fashion as Zero‘s decoy from Borderlands 2 or the Digi-jacks from Borderlands the Pre-Sequel. None of those are true and because of its special ability, I am pleasantly surprised by this action skill.

When Zane activates his Digi-clone he deploys a holographic decoy of himself onto the battlefield. The Digi-clone will remain stationary and attract aggro as it will start shooting at your enemies. The cool mechanic of this action skill is that you can switch places with the decoy at any time. You teleport to the location of the decoy and the decoy will take your last position.

During the first presentation, the developer used the decoy to avoid taking damage from a massive area of effect attack. By switching places at the last second the Digi-clone took the hit. When I got my hands on the game I used the Digi-clone to flank my enemies. There was this combat zone that contained multiple lanes. By deploying my decoy in one lane and then flanking my enemies myself through the second lane gave me the upper hand. The cool thing is that I switched places with the decoy when I had advanced like 10 meters or so. As the enemies had adapted to my push, I was able to flank them once again as I was now positioned in the other lane. It was an action-packed set of chess moves by tactically advancing 2 pawns across the board. Really cool!

The SNTNL is a handy gadget to have around. I always appreciate it when a drone or a turret helps me out in times of need. I like the fact that you can give the drone targets to focus on. When you have your SNTNL out on the battlefield, it will spot enemies and an icon will appear above their heads. When you look at the target you can press the action skill button again and the drone will advance on that target.

Drop a deployable Barrier that blocks incoming projectiles. Zane and allies can shoot through the Barrier, dealing increased Gun Damage. Pressing the Action Skill button or Grenade button while Barrier is active picks up and holds the Barrier, but the size and bonuses are decreased.

The shield looks to be the least exciting action skill out of the 3. That said it can be a very useful utility as it blocks incoming projectiles and if you shoot through it, you will do increased damage. During my play sessions, I occasionally was overwhelmed by the number of enemies. Having the shield equipped can be a good counter to that. As the shield will provide you with cover and if you place it correctly you can gain some additional firepower. A cool thing is that a buddy can benefit from these bonuses. This would, therefore, be a useful tool during co-op sessions. If you don’t have a friend to play with or like to rush through the game solo, you can pick up the shield and use it as you move around.

The ability to pick up the shield is neat as it gives you the option to rush the battlefield. The only piece of feedback I have for it is the ability to activate the personal shield from the start. Currently, you have to throw it down and then pick it up. What if GBX added an additional button command? A short press of the action skill button deploys the shield on the ground and by holding the action skill button it will go to the picked-up state from the start. This would be more efficient for advanced players that know what they want. I gave my feedback on this feature at the event to one of the designers. So hopefully they can (still) add that in.

I enjoyed my playtime with Zane Flynt. He might become the min/max character of this game. His action skills allow for some intelligent play. I can see someone play an offensive Zane, running and gunning with the shield equipped. Flanking your opponents by switching perspectives with the Digi-clone is fun and can be action-packed. But I can also see someone play him a bit more laid back and let the drone do its job. I like that all the action skills can be used in a passive but also active way. Giving you more ways to play. Props to the design team for changing the grenade button sacrifice into a win.

During the Borderlands 3 Gameplay Reveal Event, I was also able to get some hands-on time with Amara.