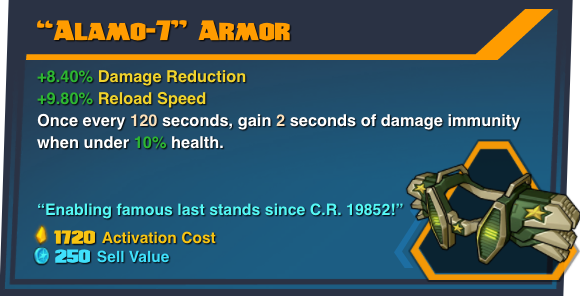 The “Alamo-7” Armor is a legendary piece of Gear  that increases the  damage reduction and reload speed.

For those who wonder where does alamo-7 armor drop from? The “Alamo-7” Armor can be obtained by defeating ISIC Magnus who is the final-boss in episode 1 of the story campaign, The Algorithm. This piece of gear will only drop on Advanced difficulty.

Great piece of gear for survivability that let’s you cheat death. With it’s secondary stat being reload speed makes the Alamo-7 Armor great for Battleborn heroes that  require to reload. New players that would pick a character like Oscar Mike will be able to stay in the battlefield a bit longer. But this piece of gear would also make a tank like Ghalt even more of a bullet sponge.