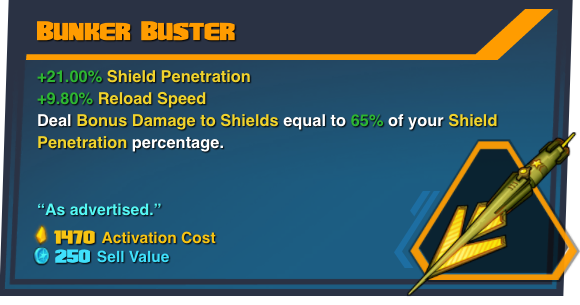 The Bunker Buster is a legendary UPR piece of Gear  that increases Shield Penetration and reduces the Reload Speed.

The legendary effect on the Bunker Buster will  provide  Bonus Damage to Shields equel to 65% of your Shield Penetration percentage.

How to get the Bunker Buster ?

The Bunker Buster can be obtained by defeating the  H3NCHM4N  who is the first mid-boss in episode 1 of the story campaign, The Algorithm. This piece of gear will only drop on Advanced difficulty.