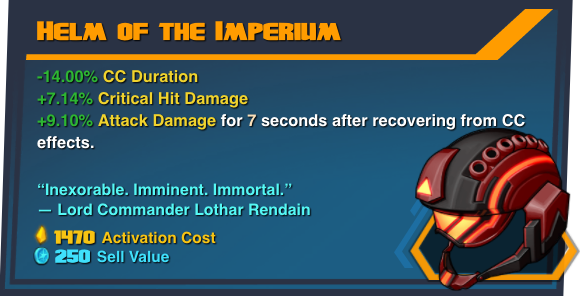 The Helm of the Imperium is a legendary piece of Gear  that reduces CC Duration and increases the Critical Hit Damage.

The legendary effect on the Helm of the Imperium will provide a temporary Attack Damage boost when you recover from a CC effect.

How to get the Helm of the Imperium ?

The Helm of the Imperium can be obtained by defeating Redain who is the final-boss in episode 8 of the story campaign, The Heliophage. This piece of gear will only drop on Advanced difficulty.