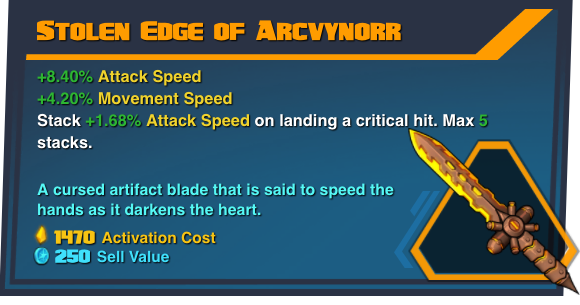 The Stolen Edge of Arcvynorr is a legendary piece of Gear  that increases the Attack Speed and Movement Speed.

The legendary effect on the Stolen Edge of Arcvynorr will provide stacks of Attack Speed on landing Critical Hits.

How to get the Song of Vigor ?

The Song of Vigor can be obtained by defeating The Old Sentinel who is the final-boss in episode 5 of the story campaign, The Sentinel. This piece of gear will only drop on Advanced difficulty.

While being tied for gear with the best attack speed, the Stolen Edge of Arcvynorr is significantly easier to get then the Vow of Zealous Fury. In PvP Matches i always have that feeling that i need to get to places just a bit faster. So that movement speed increase helps you out with that. With the winter update the VoZF legendary effect now only lasts for 5 seconds.  The Song of Vigor is in my Top 10 Legendary Gear.