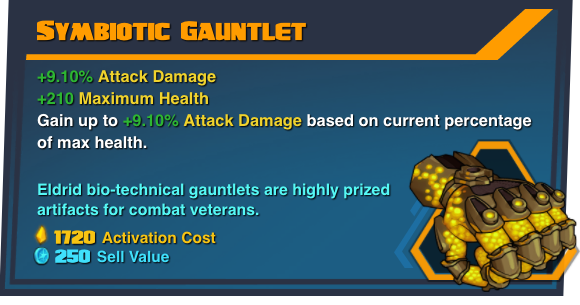 The Symbiotic Gauntlet is a legendary piece of Gear  that increases the Attack Damage and Maximum Health.

The legendary effect on the Symbiotic Gauntlet will boost your Attack Damage based on the amount of health you have.

How to get the Symbiotic Gauntlet ?

The Symbiotic Gauntlet can be obtained by defeating Guarian Arc who is a mid-boss in episode 5 of the story campaign, The Sentinel. This piece of gear will drop on Normal and Advanced difficulty.