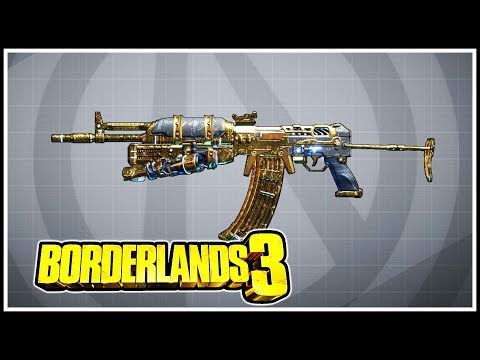 The Dictator is a Legendary Weapon in Borderlands 3. This Vladof Assault Rifle shoots 3 bullets in a horizontal line by default, however, it comes with a fixed bipod. This alternate firing mode increases the projectile count from 3 to 7. But also increases the recoil, sway, and accuracy at the cost of your movement speed.

The Dictator is a great weapon against bosses. But while you are able to deal a lot more damage in Bi-pod mode you are also making yourself an easy target. You want to aim down sight as this reduces the sway on your weapon.

If you need more survivability while you are in Bi-pod mode, you can use a hot spring grenade to create a healing aura on the ground.

“Let them hate me, so that they will but fear me.”

How to get the Dictator?:

The Dictator can be randomly obtained from any loot source but it has a high chance of dropping from Agonizer 9000 & Terror who are located in the Guts of Carnivora on Pandora.