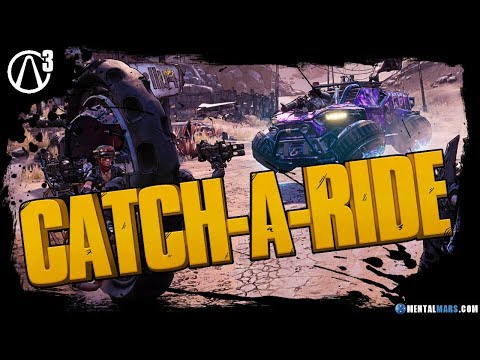 Catching a ride just became a literal thing in the Borderlands universe. In Borderlands 3 you are able to hijack enemy vehicles, steal their parts, and customize your personal ride that you can enjoy! Find out about all the customization elements and I’ll tell you a little bit about my driving experience in Borderlands 3.

During a meetup I had with a few devs, I found out that multiple devs at the Quebec studio have worked on racing games like the Need for Speed franchise. Therefore it was a logical choice for them to take on this project.

I was able to drive around with a few vehicles at the Borderlands 3 gameplay reveal event. The controls felt familiar and the handling of the vehicles was good. During the demo, you can quickly obtain a vehicle. However, that first section is pretty open so there isn’t a lot you can bump into. I didn’t encounter any weird collisions with invisible objects it something like that.

Later on in the demo, you do get to race through the narrow streets of Meridian Metroplex. Once you meet up with Rhys, Lorelei mentions you can give the new cyclone bike a spin. I think this is the vehicle that everyone is most excited about trying out. While I wasn’t impressed by its weapons at first, I was impressed by how well it maneuvered. The handling at such high speeds and in the limited navigation space was great. I was able to swiftly navigate the city although half of the time I didn’t know where I was going because everything was new to me.

I noticed that there are a lot more Catch-A-Ride stations in the areas during my play session. This might be due to the location but it is a welcome addition to the game. No longer having to walk really long distances to get to a vehicle. Walking to your vehicle is a thing of the past because at any time you can also fast travel to your vehicle. This speeds up things significantly.

Catching a ride just became a literal thing in the Borderlands universe. In Borderlands 3 you are able to hijack enemy vehicles. When you successfully claimed your new ride, then you might run into some new vehicle parts. You can then drive your vehicle to any ‘Catch-a-Ride’  station and scan in the new part. When doing so, you are then able to digi-struct those parts yourself for any of your future rides.

There are 3 different vehicles you can spawn from Ellie’s Catch-a-Ride stations. You have the Outrunner, the Technical, and the Cyclone. Each of these vehicles has a variety of different customization options. You can choose your Body Type (Vehicle type), Driver Weapon, Turret weapon, Mods, Wheels, Armor, Material (skin theme), and color pallet.

Developed by one of the big five coörporations is the fasted land vehicle available and can “outrun” anything else. It cannot outrun other Outrunners, however, since they go the same speed.

There’s nothing technical about the way that the CoV built this. But it’s surprisingly sturdy, packs quite a punch and is a blast to drive!

The Cyclone makes up for its lack of defenses by allowing its driver to outmaneuver other vehicles. It’s armed with an array of fast weapons that can be aimed at 360 degrees.

When selecting your ride, you can choose between a variety of different paint job themes. After selecting a theme you can also adjust the 3 base colors of the theme to personalize your ride.

You can find different skin themes throughout the game, these items drop alongside the other weapons and loot in the game.