Borderlands 3 Takedown at the Guardian Breach

Takedown at the Guardian Breach

A new takedown is coming to Borderlands 3 and it’s focused on the Eridian Guardians. In the Takedown at the Guardian Breach, you will face off against tough enemies as Gearbox Software wants to challenge you with this end game content. Besides having to fight your way through this gauntlet there will be some platforming and puzzling. In this Guardian Takedown Guide, I’m going to tell you how you can prepare for this challenge. Takedown at the Guardian Breach will be released on June 4, 2020, as a free content update.

Takedown at the Guardian Breach is end game content that is designed to challenge you. Therefore, you want to equip the best gear and have a good character build. There are weapons that currently define the meta of Borderlands 3. It’s a good idea to farm for these, however, as the developers mentioned. They are going to fine-tune Mayhem Mode 2.0 and adjust some of the legendary items in the game. Therefore, I think it’s a good idea to not just rely on that one overpowered weapon.

The health bar of a Guardian consists typically of a large shield. Therefore, they are weak against the shock element. Shock deals 200% damage in normal mode and 250% damage in TVHM against shields. It causes targets to be electrocuted which will deal very high damage over a 3-second duration. This way you can strip through those shields. I already compiled a list with the best shock weapons in preparation for the Guardian Takedown. That said, Guardians can spawn with armor that’s why it’s a good idea to also have good corrosive weapons in your inventory. Don’t use your shock weapons against these yellow Armor health bars as your damage will be reduced to 80% in normal mode and 65% in TVHM. Corrosive weapons deal 150% (Normal) and 175% (TVHM) damage against armor. You can also use Cryo against Armor but it will do 25% less damage then Corrosive. Want to learn more about elemental damage then check out this elemental damage guide.

You are going to need guns, LOTS OF GUNS! (But not too much or else you cannot pick up the new items that come with the Guardian Takedown)

Revenge of the Cartels Legendaries

The Revenge of the Cartels is a limited time even and has a lot of exclusive legendary items. Therefore, you need to hurry if you want to pick up these items. Because when the Guardian Takedown is released the Seasonal event will end.

With the arrival of Mayhem 2.0, Gearbox Software added Mayhem 6 legendary items. You can only get these when playing on Mayhem Level 6 or higher. Playing on the higher difficulty tiers can be challenging but with these weapons in your arsenal, things will become easier.

While the weapons mentioned above will outperform most of the items on this list. These are still pretty good and worth considering. While some of them lack the punch on the higher Mayhem Levels, Gearbox Software is going to adjust the higher mayhem levels to make enemies less of a bullet sponge.

These legendary weapons are great for mobbing overall. The Conference Call, the Hyperfocus, and the Kill-o’-the-Wisp (stripping shields).

Having quality anoints on your gear really helps out in the end game content. Some of the new anoints can really help you out. Go for anoints that compliment your build or specific Vault Hunter. Farming for Gear on the higher Mayhem Levels increases your chance of getting anointed gear. At Mayhem Level 10 you have a 100% chance of gear being anointed.

Throughout the Takedown at the Guardian Breach, you will be encountering a lot of Eridian Guardians (duh). They are pretty fast-moving enemies. While they don’t shoot bullets they can have ranged attacks. When they die they can release a soul that can possess an ally which makes them stronger. Therefore, you want to shoot the soul before it upgrades the enemy. It wouldn’t surprise me if some of the Guardian Minibosses are more common during this Takedown. In the gameplay presentation, we have already spotted new Guardian types. One of them creates this massive area-of-attack energy field. While you can also spot multiple fire pillars that are summoned from the ground. I don’t think we will be seeing Elder types of the guardian enemies as these are just slower versions of the enemy. Gearbox added these in boss fights to gain a second win.

During episode 7 of the Borderlands show, we got our first glimpse of Takedown at the Guardian Breach. We saw a lot of Eridian enemies one of the bigger ones created these large area-of-effect bubbles. For a brief moment the player walks into one of them. The Vault Hunter takes radiation damage from this attack. You could farm for the Red Suit. This legendary shield makes you immune to Radiation. The attack makes me wonder if the Guardian Takedown will feature more radiation attacks.

The player in the presentation uses the Lead Sprinkler, a Hex Grenade, the Rowan’s Call, the Ogre, the Barrage, and the Hyperfocus. Usually, for presentations the developers set up a specific build. This makes me wonder if some of these items are getting buffed with the upcoming patch.

How to get Infinite Legendaries in Borderlands 3 Bounty of Blood
July 4, 2020

How to Access the Locked Cell Room in Vestige – Borderlands 3 Bounty of Blood
June 25, 2020 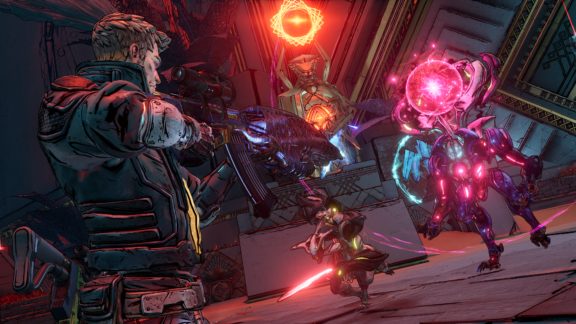