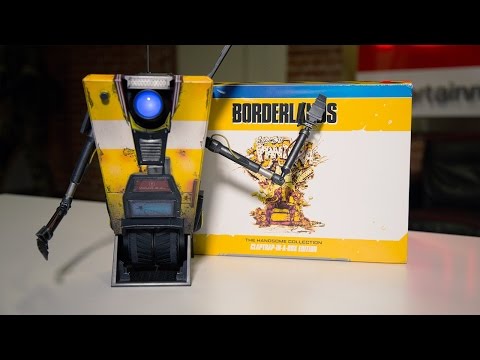 Borderlands: The Handsome Collection is the essential Borderlands compilation and includes the definitive versions of both Borderlands 2 and Borderlands: The Pre-Sequel, built specifically for next-gen consoles. PlayStation 4 and Xbox One customers will experience the absolute highest performance and highest fidelity graphics for any Borderlands game ever played on a video game console. For the first time in the franchise’s history, play four-player split screen on a single television, all in stunning high definition.

Experience the entire Handsome Jack saga (including all available bonus add-on content), from his not-so-humble beginnings to the heights of his egomaniacal tyranny. Continue the adventure by transferring your previous saves to the next generation of consoles with the new cross-save functionality.

This is a very cool collector’s edition you can still get your own Clap-in-the-Box from Amazon.